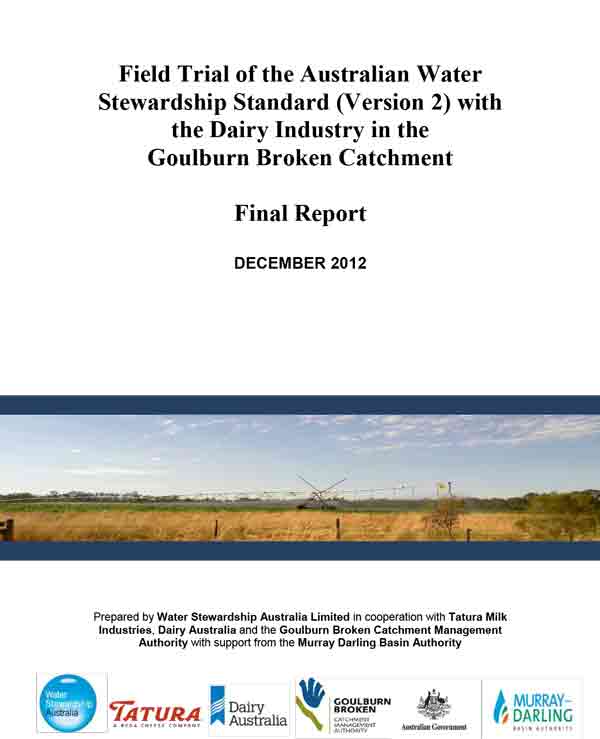 This field report captures the findings of an extensive trial of a water stewardship standard in the Australian dairy industry. The trial evaluated the water performance of Tatura Milk Industries and its suppliers, as well as the indirect water use of 280 dairy farms in the Shepparton Irrigation Region. The water stewardship standard trialled was later published as the AWS Standard in 2014.

Learning from the trial has already been incorporated in a new international water stewardship standard that was launched earlier this month at a meeting of the United Nations CEO Water Mandate in Mumbai, India.

Secretary of Water Stewardship Australia, Michael Spencer, said the field trial undertaken in the Goulburn Broken with the CMA, Dairy Australia and Tatura Milk had played an important role in validating the concept.

We were able to show in the Goulburn Broken that water stewardship could be a tool for meeting the emerging requirement of global multi-national and national customers that their suppliers use natural resources, including water, responsibly. The trial showed that water stewardship could work with existing systems and tools to promote best management practice in a way that avoided duplication and unnecessary additional compliance costs for well-managed suppliers. This will be an important if we are to encourage smaller primary producers to participate in these programs in a way that rewards best practice through recognition and securing market access.

This field trial also showed that water stewardship can be an important tool for engaging major water users in natural resource management issues within a catchment leading to improved governance and catchment management.